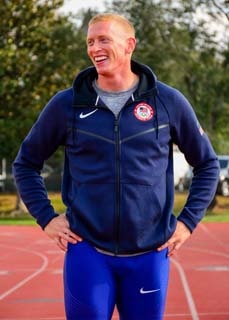 Squint your eyes — disregard the 2016 USA Olympic Team uniform — and you would swear this year’s featured OnTrack cover athlete had stepped right off a 1956 sports page and onto the runway at Azusa Pacific University for our photo session.

Javelin thrower Cyrus Hostetler’s tight, blond crew cut, firmly–set jaw and 6'2" frame projects the classic look of an All–American… which he actually is. One might assume this 83.83m (275') thrower is one of those golden boys of sport, blessed with natural talent, good fortune and a bottomless well of support from wealthy sponsors. The truth? As talented as Cyrus is, it is clear that raw determination is at the heart of his success. Sheer grit has propelled him from his 2005 introduction to the javelin, through throwing on three college teams, claiming the #2 all–time collegiate throw by an American, competing in three U.S. Olympic Trials and, to date, appearing in two Olympic Games.

At 30, Cyrus and his 34-year-old training partner Sean Furey have become what he terms “old men” in relation to the youngsters at the Olympic Training Center in Chula Vista, Calif., chasing the next big throw in an event known for punishing joints, tendons and ligaments to the breaking point. “I am the rehab king,” he proudly exclaims, having battled back from injuries to his UCL, ACL, MCL, rotator cuff, labrum and meniscus. “All could have been career–ending, but once I have an injury, I become an expert,” observes Cyrus, with the understanding that such setbacks are merely factors to be managed over the span of an extended athletic career.

It all started when, in his senior year, the Newberg High School letterman in football, basketball and baseball decided to try his hand at the javelin. That first year, Cyrus broke his district’s meet record with the winning throw of 60.70m (199'2"), advancing to the Oregon State meet, where he threw 201'5", a performance that in any other year might have been the state’s winning mark. As it was, he took third place that day. Cyrus went on to finish the season by beating the nation’s #1-ranked high school javelin thrower with his own personal best of 62.55m (205'2") at the 2005 USA Junior Nationals, earning Cyrus fifth place over all.

After completing his first college year at Weber State in Utah—a year marked by experimentation with the hammer and weight throw, as well as a serious injury to his elbow—Cyrus requested a release in order to move on to compete for another school.

Returning to Oregon, Cyrus enrolled at Lane Community College in Eugene, where he would earn his A.A. degree, play basketball and compete on the track team, primarily as a thrower, but also as a decathlete, under the direction of Head Track Coach Grady O’Connor and then “multis” coach Cody Fleming. After a hamstring injury forced Cyrus to focus on the javelin, he finished up at Lane by winning the 2008 NWAACC Championships with a new 73.63m PB (241'7" PR) breaking the school javelin record by 30' and earning the title of Conference Field Athlete of the year. Cyrus capped the season with an appearance at the U.S. Olympic Trials, placing 18th with a mark only a foot behind that of American record–holder Breaux Greer.

In 2009, Cyrus moved across town to the University of Oregon, when, in his words, “money fell from the sky.” Coach Lance Deal offered him a suddenly–available scholarship to cover his full tuition, enabling him to compete and pursue his undergraduate degree in architecture. It was at the U of O that Cyrus met Coach Christina Scherwin, the former Danish National Champion in the women’s javelin, a fortuitous pairing that boosted Cyrus’ performance by 30’ over the course of a single year. During his time at U of O, Coach Scherwin would guide him to setting both the school and conference men’s javelin record, winning two PAC-10 Championship titles and earning two Academic All–American rankings. 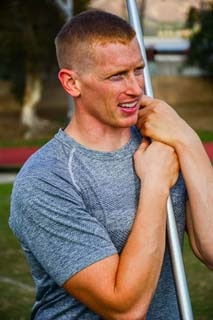 Upon graduation, Cyrus embarked upon his post–collegiate athletic career, addressing more physical challenges, and learning to balance work as a graphic artist and web designer with his rigorous training schedule. When he wasn’t working or working out, he concentrated on “pre–hab” and nutrition, further developing the cooking and baking skills he had acquired as a youngster. (It’s amazing what a well–placed dozen cookies can do to open a spot in a meet director’s crowded roster!)

Cyrus also took the initiative to launch himself into international competition, traveling to Guadalajara, Mexico, to take second place in the 2011 Pan American Games (82.24m/269'9"), and later to Denmark for a 3-week training camp prior to

While not satisfied with his first Olympic outing, Cyrus looked to improve his technique for another crack at the world. He trained hard, and gathered precious funds for intensive training in Germany and a subsequent 2014 European tour consisting of six meets. During the final competition of his trip, Cyrus threw 79.59m (261'1-1/2"), setting a meet and stadium record in Austria. taking his place on the ultimate international stage—the Olympic Games in London in 2012.

Despite having been released from the Olympic Training Center’s fully-sponsored program in 2015, last year was actually Cyrus best yet. He set his current PB (PR) in May at the Tucson Elite Classic, which earned him a berth on the U.S. Olympic Team, well before he won the Olympic Trials with a throw of 83.23m (273"). His second Olympic performance placed him 20th at the Games in Rio de Janeiro, ahead of his American teammates Sam Crouser and Sean Furey.