Last year saw the passing of two members of our extended OnTrack family. We take this opportunity to

share their lives with you, our readers, as a way to honor them for the contributions they made to our world of track and field, their communities, and in particular, the pole vault.

A powerful athlete with impressive biceps, Don Bragg was large, brash and wore his heart on his sleeve.

Standing 6'3" and weighing in at 197 pounds, he was big for a pole vaulter. His size was particularly notable, as so much of the technique associated with the event at that time was reliant on gymnastic ability necessary to maneuver the athlete over the crossbar using the straight metal poles of the day. He took particular care not to gain weight in order to avoid damaging his aluminum alloy pole.

From a very early age, Don had the daring of a vaulter. As family lore tells it, the New Jersey native grew up enthralled by the Tarzan films of his youth, inspiring the youngster to create his own “Tarzanville” in the neighboring woods, a creation complete with rope swings he used to reenact the stunts he had seen his hero execute. From there, it was only natural the conditioning from his play would be applied to his early attempts at using bamboo rods to jump over canals, and then clotheslines. He carried his adopted Tarzan persona throughout his life, first to promote his dream of portraying the character on film, and in later years as his calling card.

As a sophomore at Penns Grove High School, Don met Bob Richards, the acclaimed pole vaulter of his day. With Richards’ encouragement, Don committed to formally pursuing the vault, determined to become the best in the world. He was eventually recruited by famed track coach “Jumbo” Elliot to attend Villanova University and quickly rose to the top of his event, becoming the NCAA pole vault champion in 1955.

Don was particularly successful in indoor competition. He tied for first place twice in the AAU Indoor Championships, and then won the event from 1959 through 1961. In 1957, Don broke Cornelius “Dutch” Warmerdam’s 16–year–old world indoor record in Philadelphia with a jump of 15'9-1/2".

Injury kept Don from qualifying for the U.S. Olympic team in 1956, but at the 1960 U.S. Olympic Trials, Don set the world outdoor record (15'9-1/4"), making his the final record set in competition during what is known as pole vault’s “Metal Era.” This performance earned him a ticket to Rome, where he and OnTrack founder Ron Morris battled on an international stage, locked in a six–and–a–half–hour duel for the gold medal. When the competition ended, Don’s 15'5-1/8" mark won the day, pushing the Olympic record for the event nearly six inches past the one set by Richards in 1956. Don celebrated by letting out his signature Tarzan yell.

After retiring from competition, Don’s  imagination and inventive nature continued to take him on an eclectic journey through life including travel as a “goodwill ambassador” for the U.S. State Department, running a camp—dubbed “Kamp Olympik”— for inner city children with his wife, Theresa, writing poetry and books, and even opening a kayak rental business. During one of his more conventional phases, he spent a decade in service to Stockton University of New Jersey as the school’s athletic director.

Don “Tarzan” Bragg departed in February of 2019, at the age of 83, after suffering a series of health issues. The spirit of this remarkable athlete will live on through the large, loving family he and Theresa created, as well as the many people whose lives he touched. 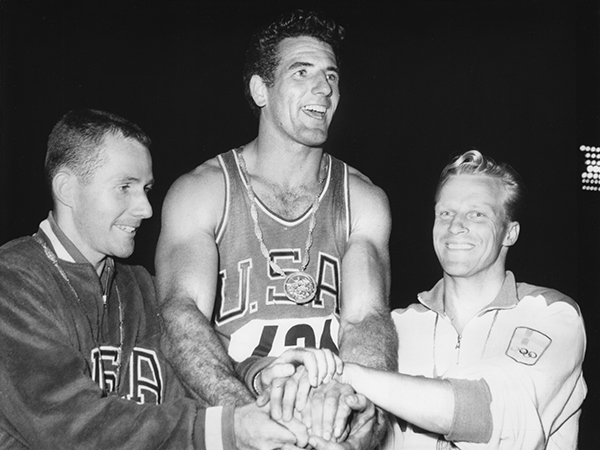 Hans Lagerqvist (“Hasse” to many of his friends) was a bit of a late bloomer, according to his long–time friend, Tom Ecker. “Hans and I met a the Olympic Stadium in Stockholm in July, 1964. I was a visiting American coach and he was a 24-year-old Swedish pole vaulter,” recalls Ecker. “Since most American pole vaulters were retired after _ nishing college, I figured he was too old to be pole vaulting. But he was such a nice guy, I decided to work with him anyway.

“He had trouble keeping his legs up before reaching the crossbar, so we put the bar up to 17 feet and had him repeatedly vault and kick the crossbar with his feet. Little did I know that Hans would be clearing the crossbar at 17 feet with his entire body a few years later,” says Ecker, who extended an offer to train the young vaulter, on the condition he could get himself to Bowling Green, where Ecker coached the track team at Western Kentucky University.

Hans took Ecker up on the offer, showing up for some summer training with a discus thrower friend, and so began 56 years of friendship, with the two men managing to meet somewhere in the world at least once a year, until both men’s health prevented them from doing so in 2019. (When Ecker’s biography Wherever I Choose is published later this year, Hans will be prominently featured.)

Back home in Sweden, Hans trained with Kjell Isaksson, the vaulter who, in 1972, set and re–set his event’s world record three times. The two athletes were as close as brothers, living in the same neighborhood in a suburb of Stockholm. Together, they started a small importing business (“Lager-Isak”) for the purpose of supplying pole vault equipment to their fellow vaulters.

Hans recorded his personal best mark at the 1972 European Athletics Indoor Championships when he vaulted 5.40m (17’ 8-1/2”) at the age of 32. While he equaled his competition’s winning vault, Hans came in second to Wolfgang Nordwig based on attempts. In addition to the two Swedish national titles, and the many records he held, Hans represented his country at the 1972 Olympic Games in Munich, finishing seventh. When his career as an “elite vaulter” ended, Hans continued to participate in World Masters pole vault competition, setting world records in three age group categories, and winning 11 world titles from 1981 to 2015.

Hans’ friendly, open personality made him a natural ambassador of the pole vault. He traveled widely, and gathered many close friends along the way, among them, OnTrack’s Ron Morris. Over the years, the two vaulters would exchange hospitality, playing host to each other during their visits to Sweden and California. “I met him in 1963 while in Europe that summer, and I gave him one of my fiberglass poles when I left for home,” remembers Morris. “He would show up at a meet with his great smile and offer personal help to each of his competitors.”

Hans had a particular fondness for developing vaulters, and in his effort to share his knowledge with them, he wrote and published a book on the event which has served to keep Swedish vaulters competitive on the European sport scene. In his later years, Hans had the opportunity to work with Armand “Mondo” Duplantis, the young American–born vaulting phenom who is expected to represent Sweden at the 2020 Olympic Games.

As Hans could not live by pole vault alone, he maintained a traditional career, along with the rest of the amateur athletes of the day. Educated at the Royal Institute of Stockholm, Hans worked as a civil engineer engaged in surveying and appraising properties on behalf of the Swedish government. In the course of his work, he was able to survey many of the islands in the Stockholm archipelago, as well as helping in the negotiation to compensate landowners for their property slated for public works projects.

A confirmed bachelor for much of his life, Hans seemed to have met his match in Yvonne Norrbom, a vivacious retired surgical nurse and one–time athlete to whom he was engaged. Together, they traveled to Hans’ competitions and pursued an active, healthy lifestyle. When Hans suffered a cerebral hemorrhage resulting from brain tumors last year, Yvonne cared for him faithfully until cancer took him from us last July. He was 79. 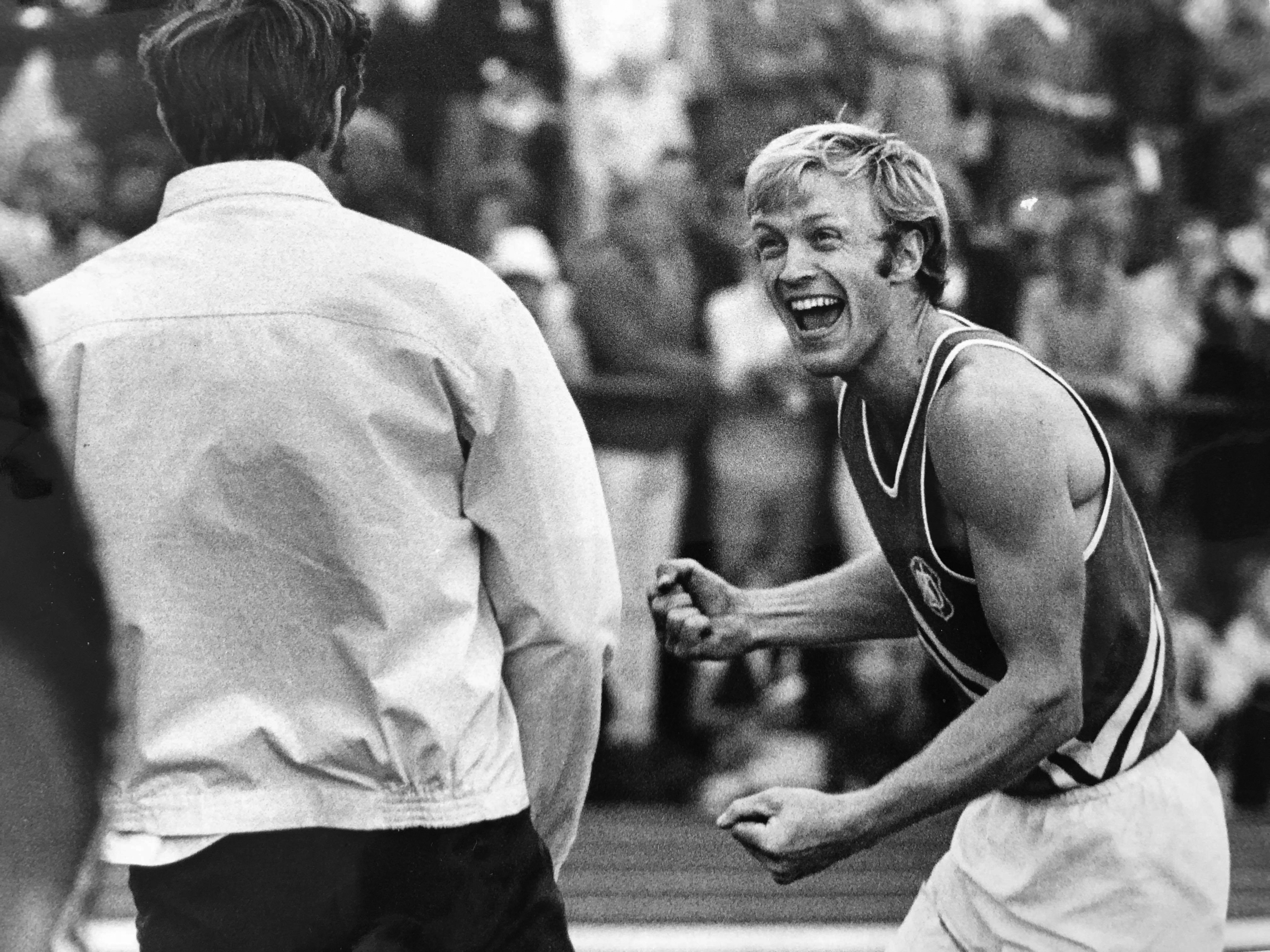 Hans Lagerqvist displays his love for the pole vault with classic “Hasse” enthusiasm.